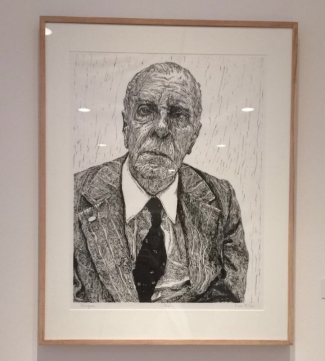 That guy right there is Jorge Luis Borges—Argentinian, short storyist, poet, part-time philosopher, and speaker of phrases such as, “I have always imagined that Paradise will be a kind of library.” This is a phrase I’m sure most of us would agree with. For me, paradise would be a library with lots of natural light, floor cushions, maybe a few cats, and defiantly an endless open bar.

Borges’ short story, “The Library of Babel,” is one of his most read works and one of my personal faves. Originally published in Spanish in 1941 in his collection, El Jardín de Senderos que se Bifurcan (The Garden of Forking Paths), “The Library of Babel” is Borges’ love song to libraries. In the story, Borges narrator unfolds his universe of an infinitely expansive library. On this library’s shelves rests every single possible combination of text possible. Yes, you’ve read that right. Every. Single. Possible. Combination that could possibly exist is present. 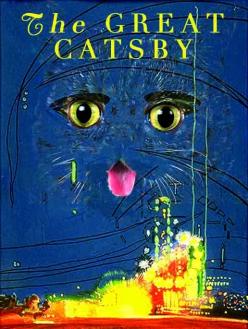 That book you’ve been meaning to write for six years? There. The Great Gastby? There, plus a version of The Great Gatsby where Jay Gatsby is half-cat-half-man and it’s actually called The Great CATSby. That poem you wrote to Steven in the ninth grade confessing your love for him and his guy-liner and studded belt? There. The term paper you wrote in twenty-four hours for your freshman sociology class that you got a C plus on? There, and probably in some sort of anthology of pathetic excuses for college course work. Breakfast at Tiffany’s? There, right next to Lunch at Tiffany’s, Dinner at Tiffany’s, Tea at Tiffany’s, Midnight Bingeing at Tiffany’s…etc, etc, you get the point!

Wait, there are also millions upon millions of books of gibberish. Because, well, every combination of that world’s twenty-three lettered alphabet doesn’t need to conform to our meandering human desire to organize for the sake of understandable, representational language! Every combination possible, are you guys getting that? The possibilities are terrifyingly endless.

Okay now that you’re caught up on the story, check this shit out. https://libraryofbabel.info/ This website is the brain child of Jonathan Basile, a dude who taught himself to code in order to create an online representation of Borges’ Library. With lots of math equations (and maybe some soul-selling I would assume), Basile has created a matrix backed search engine that lets the searcher enter text in a box (up to 3200 characters of lower-case letters, spaces, commas, and periods only) and then tells the searcher where that bit of text would be located in the Library. 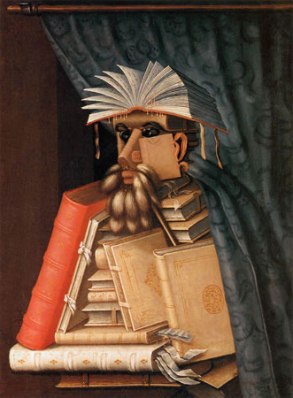 Go ahead—type your name in, your dogs name, your favorite quote, the mantra you use to get out of bed in the morning, or whatever you want in the box and the website will tell you where it appears on its own, where it appears in gibberish, where it appears sandwiched in other english words, and where it is as a title. Do it—I’ll wait. While I’m waiting, I might cry a lil because honestly, the idea of this can be overwhelming.

When speaking about this website with a friend, he asked, “where do we go from here?” He’s a fellow (aspiring) writer and the idea that everything either of us could ever write can also be generated by a mathematical code made us both pause and stare at each other in silence for an embarrassing amount of time. Every poem, short-story, or novel we could conjure can be calculated out. It’s hallowing. Why do this, then? Why write?

To seek some solace from the main man himself, Borges is quoted saying, “the original is unfaithful to the translation.” Now if we are to say the Library’s version of our work is the original, it is then unfaithful to our translation of it. The Library holds the cold, dead, sexless-robot version of our words. We breathe meaning into the translation. We make the word combinations sing. Just like a baby, cooing ba-ba-ba back up at you as she’s learning to speak.

For reference, the majority of this post can be found in the Library on page 106 of a book called “ndybxjqja” and that is just one possibility of ~10^29 possible exact matches.

Tali Cohen is an MFA candidate at Virginia Tech and poetry editor at tmr. She likes thinking about outer space, putting soy milk in her coffee, and hopes to one day be able to do a cartwheel.