When I was a boy, I was an excellent listener. Every Sunday I would go to church and the preacher would preach and I would take his messages to heart. No matter how dubious the notion (water into wine, a pregnant virgin, condoms are bad), I would accept it as an absolute truth. I trusted the man in front of the congregation because he seemed to comprehend what I needed to do to achieve eternal salvation. As I understood it, heaven – this cloudy pastel paradise I’d conjured – would make me feel much more at home than I did in the world.

Once I listened to a fiery homily about impure thoughts. Let’s say I was around thirteen. Up to that point, I believed that if I did the right thing and said my prayers, I’d be fist-bumping St. Peter in no time. But the fact that I could think my way into the hellfire terrified me because nearly all of my happy thoughts were sinful (they were usually musings about petty larceny or touching girls). For the longest time I believed that these notions could only earn me a ticket to the inferno if actualized. Turns out I was wrong. As I sat in my pew and the priest pounded his fist about the opprobrium of allowing your mind to wander, I knew I was in trouble. 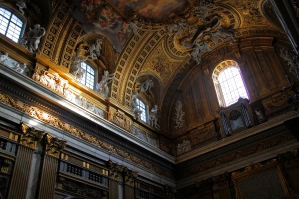 As a result, I spent a lot of time trying not to think or act. The inaction part came quite naturally to me, but I struggled to shut my brain off. In fact, the more purity I aimed for, the more impure my thoughts became. It was like when somebody says, “Don’t think of a pink elephant.” Except for me it was, “Don’t think of putting your penis inside other people.” Or: “Don’t think about how you really don’t believe a person can come back from the dead.” Or: “Don’t think about stealing a bag of chips at lunch” (this notion, I’ll admit, was actualized nearly every day). As I grew older, the pink elephant became more and more obviously sinful, more creatively devious, and more difficult to control.

I needed a way to exorcise these demons. So I started writing fiction while I was in high school. My first stories were about – God help me – Jesus. I created characters who figured it all out via the Holy Trinity, and I used a lot of bad adverbs while I was at it. Even then, when I was lost in the Catholic sauce, I knew the stories were awful. And not just because of the adverbs. Every single time my characters found God, I felt like I was telling a lie, especially because no God had ever found me.

Instead of subduing my religious doubts, then, writing fiction intensified them. When I enrolled in a fiction workshop during my junior year of college, I felt compelled to write about the world the way I actually saw it and not the way I was told I ought to see it. The stories I produced were not good, but of course they were better than the moralistic fables I had put together years before. And I no longer felt like a liar. There is that old saying about finding truth in fiction, and in those undergraduate piles of words I was moving towards a personal truth. Though I didn’t know it.

Despite the Catholic devil on my shoulder, I kept writing. My stories were about sinners and the ways they sinned. They were about selfishness and coveting thy neighbor’s wife and having other gods besides the big G and greed and lust and envy and jealousy and anything else that I felt despite being told not to feel it. And I couldn’t stop writing this way, even though I wanted to. It was like when I was a boy and I tried to eradicate sins from my thoughts: the effort perpetuated the thing I wasn’t supposed to do. Only this time I could not hide the sins in my head. They had been crystallized on the page; they were visible to whomever wanted to see them (not many people, actually, but that’s a different story).

As it turns out, in fiction, the bad stuff can be the good stuff. Not only that, the bad stuff is often the true stuff. We all have some judgmental reader (in my case, it was God) who censors us even as we compose, and if we find a way to look that reader in the face and say, “Listen, Man, You are making my stories boring and stupid,” then we’ll all produce better pieces of literature. In the meantime, if you’re still struggling to renounce your own reader – whether it’s your mother or Allah or the kid sitting across from you in workshop – take heart in this: even if it kind of hurts at first, your writing will be a lot better if you tell the truth.