Death Is Not an Option by Suzanne Rivecca 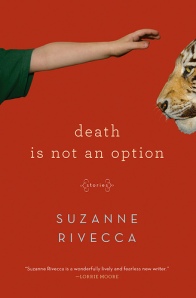 The word dexterous comes to mind when I think of Suzanne Rivecca’s fiction in Death Is Not an Option, not just because she demonstrates her mastery of point of view by running the gamut of first, second, and third person in these stories, nor because the voice of the pieces ranges from precocious teenager to jaded if insecure professor to well meaning though ultimately destructive elementary school teacher, but because in these stories she creates compelling, self-actualized women who confront their wounding pasts but recognize that in doing so they risk the equilibrium of their present. Her characters totter at the edge of the precipice. They grasp after tree roots while scaling the cliff. In doing so they remind us how tenuous our hold on life and sanity is, how lucky—how miraculous—it is still to be standing.

Take for example her story “Consummation,” which is told as a letter to an unknown doctor. The first line, “Twenty-seven years ago, when you were a surgical intern at Bingham Medical Center in Paw Paw, Michigan, you saved my father’s life,” drops us into an ongoing reality and suggests a trio of stories—the speaker’s and the doctor’s and the father’s—that we’ll be involved in. It’s a daring first line, one that offers no explanations, no setup, not even a consistent point of view. Right away we’re drawn into a tale of life and death. Only later are the epistolary conceit and the nature of that high stakes drama revealed. The stakes are not high for the father or the doctor though, they’re only high for the speaker, who inhabits the story’s present. In precise and evocative prose Rivecca gives us the young woman’s dilemma, the slope she’s struggling up though it might just be easier to let go and slide down and down through the scree:

Why do I want so badly for you to understand what you saved?

And what, in so doing, you gave me: a life sentence of uneasy love for a man I used to fear. I hope I can write a good eulogy. I hope I can forgive myself for every dark wish I ever had. I hope that, secretly, he never really loved me. I hope I die before he does. I hope I never have to see him suffer. And I hope that someday I can say thank you for disappearing and thank you for not responding with a letter saying you remember that day in great detail and pointing out all the things I got wrong. Every person who lives a life eventually starts to make it all up: not just the past but the future too. The only thing you can’t create is the present, while it’s happening—you going about your day, Doctor, not knowing what I’m thinking, and God knows where you are: you could be saving someone, you could be killing someone, you could be breaking the news of a death, you could be filling out charts, or you could be slicing open a person as they sleep, skin flaps pulled back like pages in a book, your silver hummingbird dipping into a dark mass of pomegranate-red tissue and coming back out, that simple, that improbably facile, and depositing in a crescent-shaped silver basin the pulpy lethal bit that doesn’t belong. I’d want it sealed in a jar and given to me: the thing that necessitated such an opening.

Here Rivecca gives us a glimpse of the emotional terrain she typically navigates: the victim with a complicated relationship to the violence done to them. Almost all the women in her stories keep that “lethal bit” close. They own it, as most of us do, and though these stories hint at just how long the climb is and how far the fall, they never measure it. They never tell us in feet or in miles how far these women have to go, because, of course, not even Rivecca knows that. These mountains are as tall and as long as life. Rivecca reminds that death, after all, is akin to the ultimate cop out.